A very smart and timely update here in the UK as crowds of mainly Scottish young women queued outside the Mecca of retail that is Glasgow's Primark this morning. The restrictions on their lifestyles are being lifted and life as they knew it slowly returns. Is it a reflection on the youth of Scotland today when two of the aforementioned young ladies were asked, live on Breakfast News, what they might be looking for? Neither of them had a fuckin' clue, neither had a mask, social distancing was forgotten about and as the reporter and camera moved away both seemed to be oblivious that their juvenile giggling was captured for all to see.

Perhaps the most utopian aspect of the U.K. punk scene was that it offered creative, articulate young people the opportunity to express themselves, and to kick up an exuberantly noisy racket in the process. X-Ray Spex certainly came from this wing of the movement, the brainchild of two female schoolmates who re-christened themselves Poly Styrene and Lora Logic. X-Ray Spex was far from the only female-centred British punk act, but they were arguably the best, combining exuberant energy with a cohesive worldview courtesy of singer and songwriter Poly Styrene. As her nom de punk hinted, Styrene was obsessed with the artificiality she saw permeating Britain's consumer society, linking synthetic goods with a sort of processed, manufactured humanity. Styrene's frantic claustrophobia permeates the record, as she rails in her distinctively quavering yowl against the alienation she feels preventing her from discovering her true self. Germ Free Adolescents is tied together by Styrene's yearning to be free not only from demands for consumption, but from the insecurity corporate advertisers used to exploit their targets (especially in women) -- in other words, to enjoy being real, imperfect, non-sterile humans living in a real, imperfect, non-Day-Glo world. Fortunately, the record is just as effective musically as it is conceptually. It's full of kick-out-the-jams rockers, with a few up-tempo thrashers and surprisingly atmospheric pieces mixed in; the raw, wailing saxophone of Rudi Thomson (who replaced Lora Logic early on) gives the band its true sonic signature. The CD reissue of Germ Free Adolescents appends both sides of the classic debut single "Oh Bondage Up Yours!," one of the most visceral moments in all of British punk -- which means everything you need is right here. 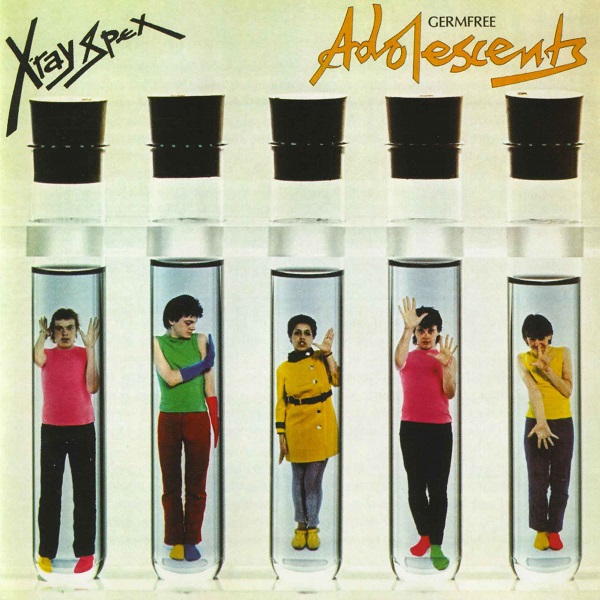 “Some people say little girls should be seen and not heard… but I think,

“OH BONDAGE! UP YOURS!!! ONETWOTHREEFOUR!”

During the initial punk explosion in both the UK and America, there was no shortage of highly talented female artists, but nobody managed as potent a combination of rage, wickedly acerbic social commentary, pop hooks, and pure rock ‘n’ roll fun quite like X-Ray Spex did in 1977 and 1978. Led by a precociously talented, 20-year-old young woman of English-Somalian descent who named herself Poly Styrene, X-Ray Spex made a brief, but influential splash during punk’s initial heyday, kicked off by Styrene’s unforgettable, empowering rallying cry at the beginning of the band’s debut single, “Oh! Bondage Up Yours!” Over a simple punk rock arrangement, Styrene howled sarcastically in a powerful, upper-register scream, “Bind me tie me chain me to the wall/ I wanna be a slave to you all,” accompanied by a 16-year-old saxophone player named Lora Logic. The combination of sax solos and punk rock at its most feral was an odd combination, as if the musical Grease had been transported to late 1970s London, but as strange as it was, it was an effective gimmick for a while, as X-Ray Spex enjoyed a brief flirtation with mainstream success in England, before disappearing from the face of the earth.

X-Ray Spex remains one of punk rock’s most underrated bands, especially in North America, primarily because their 1977 debut album Germ Free Adolescents took a good 14 years to make its way Stateside, but the record is so timeless, so bursting with energy, it’s never too late to listen to it for the first time. Thanks to a snazzy re-release of the album, complete with nearly a dozen bonus tracks, Germ Free Adolescents not only shows younger listeners where Corin Tucker and Kathleen Hanna copped their vocal styles from, but it both skewers and celebrates consumer culture so brilliantly, it feels as pertinent now as it ever has.

As her London peers sung about anarchy, life on the dole, and the growing irrelevance of the monarchy, Styrene chose to focus more on consumerism and the increasing artificiality making its way into every facet of popular culture, and the theme runs rampant on Germ Free Adolescents. “I know I’m artificial/ But don’t put the blame on me, she sings on the opening track, “Art-I-Ficial,” “I was reared with appliances/ In a consumer society.” On “Identity”, her attacks on the airbrushed female body image as portrayed in the media sound even more relevant today (“Do you see yourself in the magazine?/ When you see yourself/ Does it make you scream?”), while she takes a poke at youth culture on the title track (“I know you’re antiseptic/ Your deodorant smells nice”). Plus, with a name like Poly Styrene, it becomes more than obvious the lady has an obsession with modern material goods, as her songs mention synthetic products like plastic, latex, nylon, polypropylene, as well as name brands, such as Kleenex, Weetabix, and Woolworth’s.

The subject matter all seems so volatile, but it is all brilliantly underscored by some jubilant, upbeat rock ‘n’ roll. By the time the album was recorded, Lora Logic’s charmingly amateurish saxophone had been replaced by several seasoned session musicians (Rudi Thompson would eventually be hired as a full-time member), and the constant presence of slick sax solos adds a slick sheen to the music that matches Styrene’s lyrical themes. Jak Airport’s guitar avoids the buzzsaw simplicity of Steve Jones and the reggae-infused licks of Mick Jones, instead going for classic, Chuck Berry-infused riffs, as drummer BP Hurding provides relentless four-on-the-floor drumbeats throughout. Styrene’s vocal melodies effortlessly tread the line between catharsis and bubblegum, best exemplified by such songs as “Obsessed With You”, the insanely catchy “I Can’t Do Anything”, the more pensive title track, and the fantastic “The Day the World Turned Dayglo”, which boasts the same kind of retro swagger that The Cramps would perfect several years later.

However, it’s the great “Oh! Bondage Up Yours!” that remains the band’s finest moment, the passion in Styrene’s singing giving listeners chills. The song kicks off the CD’s impressive collection of bonus tracks, including the memorable B-side “I Am Cliché”, as well as two Peel sessions from 1978.

Of all the classic recordings from 1977 and 1978, Germ Free Adolescents remains one of the smartest and accessible of the lot, but as Never Mind the Bollocks and The Clash have gone on to become part of the classic rock canon, X-Ray Spex have sadly been ignored by many. Styrene would disappear from the public eye a couple years after the album came out, becoming a Hare Krishna in the early 1980s, only to resurface in 1995, releasing the Spex’s follow-up Consumer Consciousness, but it would prove to be impossible to duplicate the near-flawless debut. A record that pre-dated the ferocious, smart feminist punk of the Olympia, Washington Riot Grrrl scene of the early 1990s, it sounds especially prescient today, as our consumer culture continues to spiral out of control. As opposed to the usual crap we buy ourselves every day, this splendid reissue is truly money well spent.