Back in the dark days of 1982, much of my time was taken up with listening to the makers of what was known at the time as 'hardcore punk'. It was all about fast, loud guitar rock music with a political message of anarchy and war. All very heavy. Bands such as Discharge, GBH and One Way System come to mind. Vice Squad were cut from the same cloth. Vice Squad could produce good music, and indeed this album entered the top 40 charts of the time. Thankfully the second album Stand Strong Stand Proud was a marked improvement. Of course, it’s sod’s law that it didn’t fare as well as the dodgy debut in the UK charts, but in every other way, it was superior. Better songs, better playing, better sound and you could actually hear the vocals properly too. Not exactly a great record, but a good one. Out Of Reach, a smart enough single which trailed the album just about made the Top 75, but this was to be the high watermark for the band. The anthemic title track was another good single, but missed the chart completely.

Stand Strong Stand Proud, despite several throwaway numbers, clashes with social malignancies like vivisection (“Humane”), political passivism (“Freedom Begins At Home”), and the steady erosion of punk values (“Out Of Reach”) with power and complete credibility. In addition, Beki’s point of view provides a welcome contrast to the typical male-dominance in modern-day hardcore. Of the other material ‘’Cheap’’ sounds a bit like the pop-punk of C86 four years early, perhaps the Shop Assistants in a bad mood and ‘’No Right To Reply’’ is agreeably fast and riffy. The band cover Bowie’s doomy ‘’Saviour Machine’’ quite well and ‘’Rock “N” Roll Massacre’’ combines powerful guitar work with a song about pop music fatalities including Jimi and Sid. There are a couple of offerings that fly by without leaving much impression, but the album ends strongly with the neat mid-pace stomp of ‘’Deathwish’’ and strong anti-war song ‘’Propaganda’’. 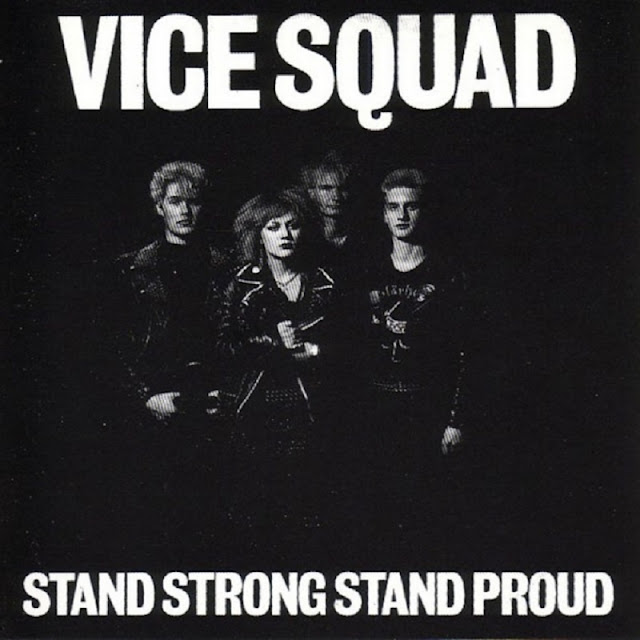 Ripped from the 2000 Captain Oi! Release to MP3