Imagine, you're the bass player in one of the happening punk bands of 1978, and on the strength of that success, you persuade the record company to let you make an electronic solo concept album, with the theme of a politically united Europe. Sound feasible? Well, I guess it helped that he was British born of French parents, homeless, living in the studio during the Black And White recording sessions and in The Stranglers, but even so...Predictably, it fell through the cracks into obscurity. 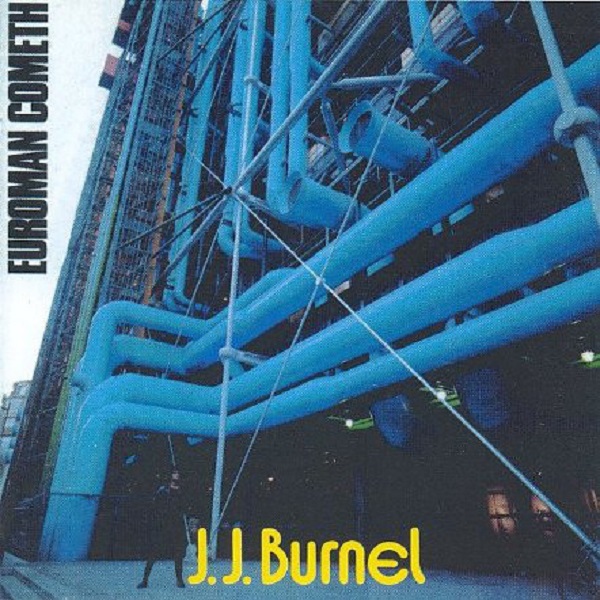 A favourite album of mine is one that you may not have heard of, Stranglers bassist J.J. Burnel’s 1979 solo project ‘Euroman Cometh’. I originally bought it way back when because I was a big fan of the band and wanted to own everything that J.J.  and the other band members put out. At the time I remember being somewhat non-plussed by this album. It was, of course, bass heavy but also political in a way that I couldn’t follow and other worldly; and as a teenager at the time I just didn’t appreciate it. In the intervening years, however, I have come to appreciate that album more and more for its genre defying avant-garde approach even though I can’t agree with the political; it was an album out of time…and has remained somewhat ignored and obscure. Musically, it was an attempt at incorporating electronic sounds into rock. Lyrically, it evolved around the idea of United States of Europe, in the Cold war context. "A Europe riddled with American values and soviet subversion is a diseased sycophantic old whore: a Europe strong, united and independent is a child of the future." stated J.J. Burnel in the inner sleeve. Opening with a list of people he's descended from (Charlemagne, Napoleon, Adolf Hitler (?!?)) voiced over a synthetic drone, it goes on to paint a future vision of a European nation state that stands independently from the U.S. and Russia.
It was merely a dream at the time, but drenched in intuitive foresight, and leaving aside the Nostradamus element (from a guy who was probably smarting at the U.K's patronising myopic view of his homeland), it actually sounds like the future too. Printed on the sleeve is a tribute to the Meriden Motorcycle Co-operative that manufactured Triumph motorcycles from 1976-83. The tribute reads, "The Triumph Workers Co-operative at Meriden have proved that personally motivated enterprise coupled with group interest is a necessary ingredient in successful socialism and the sham they call national socialism could only be suggested and perpetrated by enemies of the people." Burnel's 750cc Triumph Bonneville T140, manufactured by the Meriden Co-operative, revs its engine during the track "Triumph (Of the Good City)". Dirty synths and even dirtier basslines (naturally), rumble and twitch, pummelling a trough of post-punk electro-clash almost 40 years too soon.
Yeah, 1979 was a hell of a year...

Posted by AJ on Sunday, October 13, 2019
Email ThisBlogThis!Share to TwitterShare to FacebookShare to Pinterest
Labels: J J Burnel, The Stranglers